Hadeel Ibrahim · CBC News · Posted: Mar 25, 2018 8:00 AM AT
New Brunswick snow crab fishermen will test two ropeless trap methods this spring to reduce the use of the fishing rope blamed in the deaths of two North Atlantic right whales last year.
The two whales were among seven found tangled up in ropes and buoys in the Gulf of St. Lawrence during an especially dangerous year for the whales.
“Ropeless fishing will solve this problem,” U.S. marine biologist Mark Baumgartner said Friday after crab fishermen announced plans to try an approach already in use in Australia.
Robert Haché, director general of the Acadian Crabbers Association, said the fishermen want to do all they can to prevent entanglements.
And researchers think technology has advanced to the point where ropes and buoys floating in the ocean column for days and weeks are no longer necessary.
Mark Baumgartner, of Woods Hole Oceanographic Institution in Massachusetts, said ropeless fishing is the solution to the entanglement problem.
“Ropeless [fishing] was seen as kind of a crazy idea before,” said Baumgartner, of the Woods Hole Oceanographic Institution in Massachusetts. “But now it looks like the only actual solution to the problem.

The first method, the acoustic release, is made by the California-based underwater tech company Desert Star.
The release tool — a 2½-foot-tall PVC pipe — is attached to the regular traps fishermen use.
It has a lever arm that holds the buoy and the rope. The rope is furled in a mesh bag so it’s not floating freely in the water. The trap, the mesh bag and release tool are all thrown into the ocean.
When fishermen are ready to pull up the trap, they send a signal and the acoustic release lets go of the buoy, which floats to the surface where it can be located by the fishermen.
Jacob Wolf, marketing and sales co-ordinator with Desert Star, said this means the rope is only in the water column for as long as it takes the buoy to float up and the fishermen to retrieve it, which could be a few minutes.
He said with the exception of regulatory bodies, only the fisherman who bought the device can release it.
“Everybody is going to benefit from this kind of system whether it’s our system or somebody else who comes along and makes it better,” Wolf said. “No matter what, ropeless fishing is going to benefit the whales, it’s going to benefit the fishers, the community and the consumers.
“So it’s kind of cool to think about it like this is a real-life fairytale, kind of.” 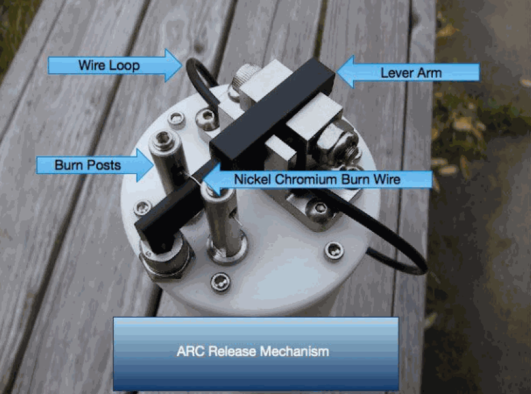 When fishermen are ready to pull the trap up, they send a signal, which leads to the release of the buoy. The buoy rises to the surface to be located by the fishermen, who haul in the trap. (Submitted)

If fishermen were to buy one to nine acoustic releases, it would cost them $1,000 to $1,995 each.
The lifetime of one acoustic release is 10 years, and it works up to 350 metres deep.
According to Fisheries and Oceans Canada, crabs can be fished in up to 600 metres.
An Australian lobster fishery has been using this device commercially since 2011, but it began as a way to retrieve scientific research equipment in 2004.

The second method is the brainchild of Richard Riels, executive director of the Washington-based Sea Mammal Education Learning Technology Society, known as SMELTS.
He said his ropeless fishing technology is inspired by a scuba tank and an inflatable bag used by scavengers and scientists.
“The buoy is still on the pot but it’s deflated,” Riels said. “And we inflate it by an acoustic trigger that opens high-pressure gas that will fill the bag and lift the trap.
“I realized that there’s no gear that we can’t lift from the bottom of the ocean to the surface with this type of technology.” 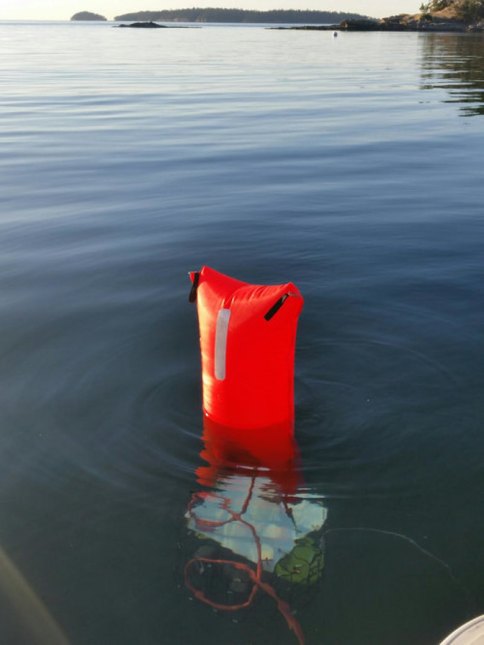 This technology is patent pending, and Riels said it hasn’t been used commercially yet, but he wants to work directly with fishermen.
“Basically, I think what we should do is work with fishermen who are willing to test and trust,” he said. “I think there’s fishermen right now in the world that would be very interested in trying to do that.
He described some current fishing methods as “archaic 400-year-old systems,” which are effective and work but have an impact on other things.

Haché said he expects this season to start seven or 10 days earlier than last year because the ice is melting faster. So he expects to start testing as early as April 20.
At least 17 North Atlantic right whales were found dead last year — 12 in Canadian waters and five in U.S. waters. Scientists believe human activity, including shipping and fishing, was the primary cause.
The $75-million gulf snow crab industry learned recently that its sustainable fishery designation was being suspended until the Marine Stewardship Council is satisfied the fishermen have solved the entanglement problem.
Only an estimated 400 North Atlantic right whales are left in the world.

Hadeel Ibrahim is a CBC reporter based out of Fredericton and Moncton. She can be reached at hadeel.ibrahim@cbc.ca

READ THE WHOLE STORY AT: http://www.cbc.ca/news/canada/new-brunswick/ropeless-fishing-snow-crab-whale-death-1.4590246?cmp=rss

One thought on “WHALES: Could ropeless fish traps really help save endangered whales?”