The unobtrusive little Black Guillemot (Cepphus grylle) is one of my favourite marine birds from the Bay of Fundy area. I first encountered them up close in 1960 when I was doing research on Outer Wood Island off Grand Manan Island, NB, where a good-sized population was nesting in the rocks along the shore.

We discovered that they were really easy to photograph because they can’t count. If one of us hid among the rocks, they knew and stayed away. If, however, two of us went into the rocky nesting area and one walked back out, then all was well and in they would fly, sitting on the rocks above my head they looked down in total confusion at the vision that has materialized among their nests.
Since they don’t occur in large flocks and appear at first glance to be a uniformly black colour, they are often overlooked by casual visitors. But they are there everywhere along rocky shores that face on open water and, seen up close, they are quite startling with their crimson feet and mouth lining and the bright white wing patch contrasting against the black body. 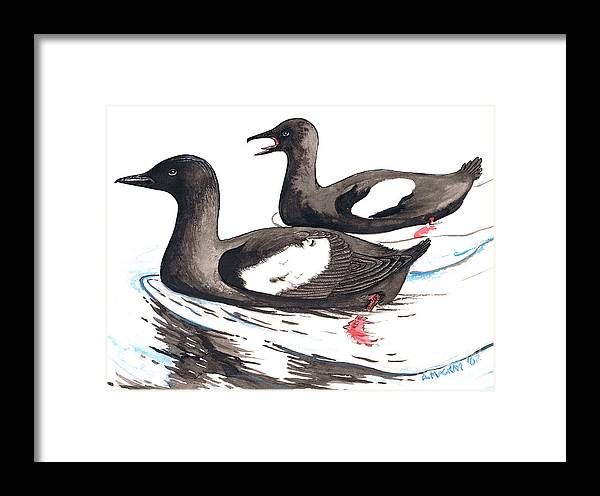 If you visit the Bay, watch for them. Maybe they are not as spectacular as our eagles, terns, puffins, and gulls, but they have an elegance in their own right.

Guillemots are only about a foot long with a wingspan that approaches 2 feet. They overwinter in the Bay of Fundy when they take on a grey/white plumage. They feed on fish, crustaceans and other marine invertebrates as well as some plant materials.

This painting was created from Art MacKay’s experience with these delightful birds on Grand Manan many years ago. If you like birds, the painting would look great on any wall.
Check it out at:  https://fineartamerica.com/featured/2-black-guillemot-art-mackay.html?product=art-print